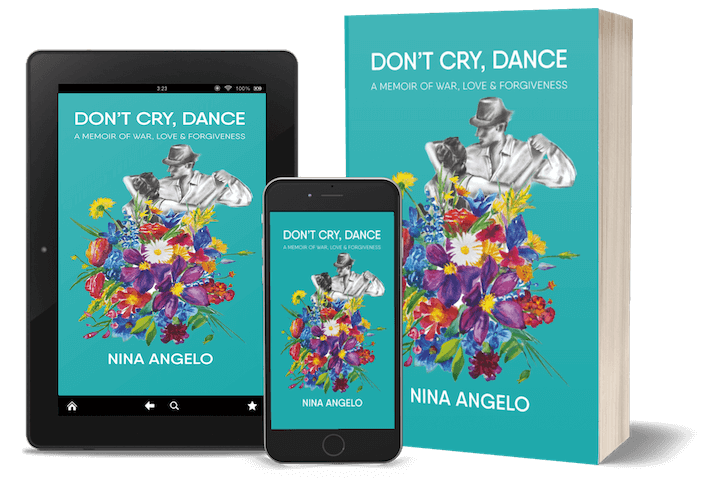 Yanka was a 16 year old Polish school girl when the war broke out and the Nazis came for her family. She wrote her story of survival, typing it herself right until the part when she was taken by the Gestapo. She could not type this alone, so her daughter Nina suggested the family interview her, and together they taped her experiences in Auschwitz-Birkenow concentration camps.

Nina is one of the originals, a passionate Australian, a travelling community artist, who harks back to the 1960s and 70s National Art School scene in East Sydney. Nina continues to serve her Central Coast community and many other communities worldwide with her own version of a dance with fabric and paints, drawing story and connection from all she encounters.

“Don’t Cry, Dance” is her family’s memoir celebrating and honouring life, love, family and tolerance of people from all cultures, colours and creeds.

“Unfortunately, in my second house-fire in 1993, I lost Janka’s tapes … I lost her voice and the rest of her story. She passed in 1985 and it was like she died again. I thought my mum’s ‘written’ story was also lost in the fire but miraculously, I found a folded copy she had given me years before she died, stored away in a chest after the first fire in 1988. It somehow survived. That was a big day.”

Nina’s father, Alberto Yacoel was a feisty Greek, Spanish Sephardic Jewish man from Thessaloniki in Northern Greece. She didn’t know much at all about his life and her paternal family, not even her grandparent’s names as 99.4 percent of the Jewish population was exterminated. Fatefully, in 2016, an email arrived from her Greek friends with a link to the Holocaust Museum in Washington in the USA. “When I clicked on the link, I could hear my father’s voice”

Nina recalls.
In 1986, Alberto had been interviewed by historian, Sophie Caplan from the Sydney Jewish Museum. He left seven hours of recorded interviews about his life. The family had no idea. It was recorded in French, 30 years earlier. Nina transcribed, translated and transformed to print his extraordinary story as a Jewish survivor of Auschwitz and Mauthausen, who witnessed and experienced the worst of the Nazi terror, and yet found the love of his life at the close of World War 2. Nina’s birth in Athens, Greece in 1947 brought new life, after all the losses Janka and Alberto had experienced in the concentration camps. Australia invited them in as new migrants. They discovered a new life and new beginning here. As a storyteller and artist, it was time for Nina to add her story to theirs and weave a lasting memory for future generations.

An excerpt from Nina’s book. Janka’s story, ‘Once Upon A Christmas Eve’, Janka’s last christmas in Aushwitz.

This is happening starting tonight.

When this happens, it's usually because the owner only shared it with a small group of people, changed who can see it or it's been deleted.

This is happening next year. Revving up to a new year, newness all round fir us all

Review from Jacob Figgy:
“DON’T CRY, DANCE – The perfect title for this book for so many reasons and the great story of where that title comes from!
A MEMOIR OF:
WAR – WWII atrocities and firsthand recollections.
LOVE – Finding love in an unusual and hard time.
FORGIVENESS – Moving on from the war and being grateful for the life and love you have. Forgiving those who have caused you unbelievable pain.
Last week I finished reading this amazing and gripping book! I read more than the first half as soon as I got it from the book launch at the Sydney Jewish Museum .  Finishing the second half just recently during quarantine I was often bugging my mum and my girlfriend with parts I found intriguing. I go on and on about the human spirit during war, mentions of family members, piecing together the facts of history (which I seem to have an obsession with) and tying them in with the stories of love, war, fear, determination, resilience, intelligence and most of all perspectives of the amazing Thio Leko and Thia Janka which I’m sure had I been born a little earlier having these people in my life would have been a privilege. I was often running to mum like a little kid saying “let me read you this part this is exactly how you described it to me growing up”. Connecting with so many aspects of the book in awe of every word the way the stories were told by the people who experienced it all first hand! Then there’s Nina’s story! You are personally an inspiration to me and I’m proud to have the same blood in our veins. What you have done for communities around the world and inspiring so many and not to mention constructing the masterpiece that I was submerged in. You are to be commended, Cousin! As I read through the book I would mark points id call “omg facts”, points I found interesting, stories syncing up with stories of relatives I was told from young and most of all life lessons branded in my brain or perspectives I related to given by Thio Leko, Thia Janka and Nina herself! This photo is just after completing the book reading out those points around the fire to my family. This book as further inspired me down the rabbit hole of researching and connecting dots of not only my Great Grandfathers (Thio Lekos brother) story but also my Portuguese heritage too and the war time stories of those family members. This is a great read and reiterates my belief in the human spirit, community and gratefulness! I hope we can get the whole family together soon to see everyone and chew Nina’s ear off.”

Review from Albie:
“I am writing to let you know how much I enjoyed your book. I read it shortly after returning to Canada. How fortunate that the records of your parents experiences, pre and post war, survived. You had a rich source of authentic material with which to work and you used it well. Their stories of persecution before the conflict began and as it unfolded, and the ways they found to deal with it were fascinating. When in the concentration camps the miracle of their survival depended on a combination intelligence and luck. How frightening and sickening for them to witness first hand mans inhumanity to his fellow man! After the war the way they were able to pick up the pieces of their lives and move forward was fascinating. To leave Europe, immigrate to Australia, raise a family and contribute to society and not be consumed with bitterness is truly amazing. It was a hugh journey and a triumph to rebuild their lives from the ashes of that terrible time! Since we have known one another for a fair number of years now I had some idea of your many accomplishments. However the autobiographical sketch of your life I found to be very interesting. The way you enriched the lives of many Pacific Islanders with your art is commendable. The contributions you’ve made to the art scene in Australia are significant and it’s wonderful you’ve been duly recognised for it. It’s nice that when you accomplish good things in your life people notice and give you the recognition you deserve! The book certainly showed your life has not been a bed of roses. You’ve struggled and persevered, raised a family on your own, pursued your art and moved forward against formidable odds. You’re a tough woman Nina and you’re a survivor just like your parents! God bless”

Review from Bob Owens:
“This is one of those books that grab you from the first chapter. A book about family, loss, unbelievable devastation but above all, love and forgiveness. It’s also about striving to pass on a better life ( even world) to those that come after. Life for Europe’s minority’s was fraught at best and catastrophic at worst. There lives were shaped by cunning intellect, chance and luck all rolled into one. This family saga is a brilliant read. You can feel the danger that surrounded them and rejoice in their small acts of defiance. The loss of family is unfathomable. What I got from this is their depth of feeling for one another and their sheer determination to survive and Lead productive positive lives. This book is a must for modern history buffs and anyone interested in populations scarred by war. I highly recommend it. I loved that it was in first person. Telling their own story. Much more authentic. I really got how they both told it differently. Your mum more emotional and dad more matter of fact. Loved it. Well done Nina. Your like your folks. The apple doesn’t fall far from the tree. You’re an achiever and a go getter like them. You just did it your way. Loved the photos too. You looked stunning at 21 ( don’t we all ) but you had a movie star look. Xx”

Review from Kathryn Vere:
“Who wants to read three amazing stories of transformation woven into one book? of a couple finding through their love a forgiveness and joy the world has rarely seen in action? Be prepared to cry, smile and be lifted out of anything you are currently facing…. because if Yantra and Alberto could forgive what happened to them and go on to raise the completely incomparable friend in a million million Nina Angelo, well…. could you dig a bit deeper?”

Review from Margot Edwards:
“I had the privilege of being Book Doula – writing mentor and co-editor – to my dear friend Nina Angelo in the creation of her powerful family memoir Don’t Cry, Dance, over the past three years. Launched in September at the Jewish Museum in Sydney, Nina gives Part 1 of this family memoir to her Jewish parents – who’s voices speak out from their perilous journey and survival through WW2 Europe and the Nazi concentration camps, to their migration journey to 1940s Australia with their baby girl Nina – where they held strong in the face of a strange and sometimes hostile world of post-war Australia. Part 2 traces Nina’s own journey, growing with their loving and courageous legacy, into the dynamic community artist and single mum of twins she still is today; leading herself into and out of her own survival story with countless peaks and valleys, to become the much-valued iconic character of the NSW Central Coast community, where she still lives and from where she works and creates and travels the world. At 72, Nina is now facing her journey with lymphoma with the same unstoppable optimism and tell-all courage she has shared throughout her life. As cancer treatment stops her in her tracks, just at the high-point of birthing her magnificent book, so too does it bring love and support from all those around her who she has touched with her bubbling effervescence and creative flair. If you are one of the generous WA crowd-funders of Don’t Cry, Dance and awaiting your book, please contact me here, as Nina is having a bundle of books sent to me for distribution. If you’d like to buy Don’t Cry Dance as a gift for Christmas, please follow the link below. I can recommend it highly as a page-turner which a message of hope and forgiveness in today’s world, as Nina and her family rise from the ashes with love and connection, again and again.

Review from Iris Nunn:
“My beautiful friend and wise Elder Nina Angelo launched her self-published book yesterday called ‘Don’t Cry, Dance.’ Her incredible life story and the story of her two parents, (who both survived the horrors of Auschwitz concentration camp,) unfolds throughout the pages. Just so SO proud of you Aunty Nina! Thank you for telling the world a powerful story of compassion and survival and love and strength above terribly adversity – Forces of Light conquering the darkness, MUCH needed for these times we live in today. ❤️”