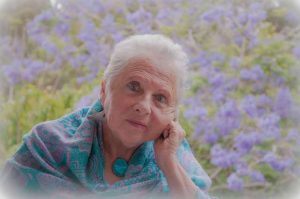 Nina Angelo was born in Athens, Greece, shortly after WW2 and migrated to Sydney, Australia in June 1949 with her parents, both survivors of the Nazi concentration camps.

In the early 60s, Nina nourished her passion as an artist at the National Art School, experimenting with many art forms before settling on her life-long journey with textiles. Her community work and artistic and cultural heritage led her on countless adventures across Australia, the Pacific Islands and ultimately, back to Europe.

While overcoming significant challenges from ‘frying pan to fire’; Nina has founded, coordinated, publicised, taught and work-shopped creative and community arts and festival events, for over thirty years. She is a colourful character with a gift for connection with people of all ages and cultures.

In 2009, Nina was awarded the Order of Australia Medal (OAM) for her ‘Service to the Arts and the (NSW) Central Coast community’. Her wider Australian contribution to community and culture has been recognised through a range of honours, awards and positions including Artist in Residence in Fiji through Australia Council for the Arts, two Australia Day Community Awards, the Governor of NSW Children’s Week Award for her work in remote locations, and an Edna Ryan Feminist Award for her life’s work empowering women and sharing their stories through the arts.

Nina’s first book, a memoir called “Don’t Cry, Dance”, celebrates and honours life, love, family and tolerance of people from all cultures, colours and creeds. She discovered her father Alberto’s interviews from 30 years ago, which had been held in the Holocaust Museum in the USA, and combined these with her mother Janka’s story, who first met her father in Auschwitz. As a storyteller and artist, it was time to add her story to theirs, and leave a lasting memory for her children, grandchildren and for future generations.

Nina is a connector of the creative dots in communities. She is a motivational speaker, arts consultant, mentor, intuitive artist, registered Marriage Celebrant, writer and activist. Nina is passionate about gathering women together to share their truth and heal the impacts of intergenerational trauma through storytelling. She seeks to uncover the creative spirit in all of us and capture the stories of our culture in our times.